last ruler of Lahore and Maharajah

Maharaja Duleep Singh (4 September 1838 – 22 October 1893), also known as His Highness Maharaja Sir Duleep Singh, GCSI, or Sir Dalip Singh and later in life nicknamed the "Black Prince of Perthshire", was the last Maharaja of the Sikh Empire. He was Maharaja Ranjit Singh's youngest son, the only child of Maharani Jind Kaur. He was placed in power in September 1843, at the age of five, with his mother ruling on his behalf, and after their defeat in the Sikh Anglo War, under a British Resident. He was subsequently deposed by the British Crown, and thereafter exiled to Britain at age 15 where he was befriended by Queen Victoria, who is reported to have written of the Punjabi Maharaja: "Those eyes and those teeth are too beautiful". The Queen was godmother to several of his children. He died young, living most of his final years in the United Kingdom. His mother had effectively ruled when he was very young and he managed to meet her again on 16 January 1861 in Calcutta and return with her to the United Kingdom. During the last two years of her life, his mother told the Maharaja about his Sikh heritage and the Empire which once had been his to rule. In June 1861, he was one of the first 25 Knights in the Order of the Star of India. 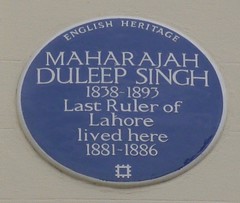