William Laud (LAWD; 7 October 1573 – 10 January 1645) was a clergyman in the Church of England, appointed Archbishop of Canterbury by Charles I in 1633. A key advocate of Charles's religious reforms, he was arrested by Parliament in 1640, and executed towards the end of the First English Civil War in January 1645. A firm believer in Episcopalianism, or rule by bishops, Laudianism refers to liturgical practices designed to enforce uniformity within the Church of England, as outlined by Charles. Often highly ritualistic, these were precursors to what are now known as High Church views. In theology, Laud was accused of Arminianism, favoring doctrines of the historic Church prior to the Reformation and defending the continuity of the English Church with the primitive and medieval Church, and opposing Calvinism. On all three grounds, he was regarded by Puritan clerics and laymen as a formidable and dangerous opponent. His use of the Star Chamber to persecute opponents like William Prynne made him deeply unpopular. Laud favoured scholars, was a major collector of manuscripts, and pursued ecumenical contacts with the Greek Orthodox Church. 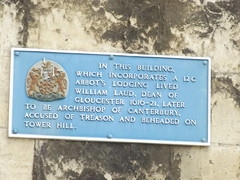 In this building, which incorporates a 12C Abbot's Lodging lived William Laud, Dean of Gloucester 1616-21, later to be Archbishop of Canterbury, accused of treason and beheaded on Tower Hill.