Edward Carpenter (29 August 1844 – 28 June 1929) was an English socialist poet, philosopher, anthologist, and early LGBT activist. A poet and writer, he was a close friend of Rabindranath Tagore, and a friend of Walt Whitman. He corresponded with many famous figures such as Annie Besant, Isadora Duncan, Havelock Ellis, Roger Fry, Mahatma Gandhi, Keir Hardie, J. K. Kinney, Jack London, George Merrill, E. D. Morel, William Morris, Edward R. Pease, John Ruskin, and Olive Schreiner. As a philosopher he was particularly known for his publication of Civilisation, Its Cause and Cure in which he proposes that civilisation is a form of disease that human societies pass through. An early advocate of sexual freedoms, he had an influence on both D. H. Lawrence and Aurobindo, and inspired E. M. Forster's novel Maurice. 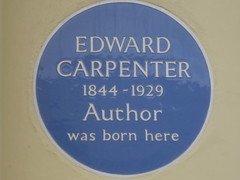 45 Brunswick Square, Hove, United Kingdom where they was born (1844)