landscape painter and Royal Academician (from 1841)

David Roberts RA RBA (24 October 1796 – 25 November 1864) was a Scottish painter. He is especially known for The Holy Land, Syria, Idumea, Arabia, Egypt, and Nubia, a prolific series of detailed lithograph prints of Egypt and the Near East that he produced from sketches he made during long tours of the region (1838–40). These and his large oil paintings of similar subjects made him a prominent Orientalist painter. He was elected as a Royal Academician in 1841. 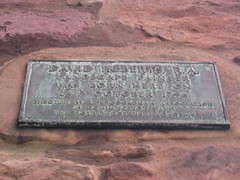 8 Gloucester Street, Edinburgh, United Kingdom where they was born (1796)