The Unity Theatre was a theatre club formed in 1936, and initially based in St Judes Hall, Britannia Street, Somers Town, London NW1. In 1937 it moved to a former chapel in Goldington Street, also in Somers Town in the London Borough of Camden. Although the theatre was destroyed by fire in 1975 productions continued sporadically until 1994 when the site was sold for social housing. Unity Mews is today on the site and a bronze plaque commemorates the theatre. It had links to the Left Book Club Theatre Guild and the Communist Party of Great Britain. By the end of the theatre's first decade, it had spawned 250 branches throughout Britain. 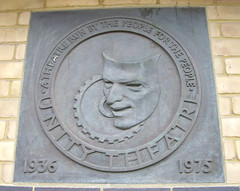