William Dargan (28 February 1799 – 7 February 1867) was arguably the most important Irish engineer of the 19th century and certainly the most important figure in railway construction. Dargan designed and built Ireland's first railway line from Dublin to Dún Laoghaire in 1833. In total he constructed over 1,300 km (800 miles) of railway to important urban centres of Ireland. He was a member of the Royal Dublin Society and also helped establish the National Gallery of Ireland. He was also responsible for the Great Dublin Exhibition held at Leinster lawn in 1853. His achievements were honoured in 1995, when the Dargan Railway Bridge in Belfast was opened, and again in 2004 when the Dargan Bridge, Dublin a new cable stayed bridge for Dublin's Light Railway Luas were both named after him. 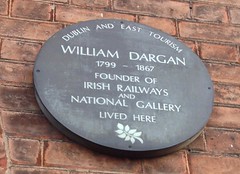