first man to row across the Atlantic in both directions

Donald Edward Allum (17 May 1937 – 1 December 1992) was an English oarsman, the first person to row across the Atlantic Ocean in both directions. On 26 March 1971, after 73 days at sea, Allum and his cousin, Geoff Allum, rowed their boat, the dory QE3, into Harrison Point in Barbados.In September 1987 Allum completed his westward crossing of the Atlantic, from St John's, Newfoundland to Dooagh on Achill Island, County Mayo, Ireland. The journey took 77 days and very nearly ended in disaster. Allum died in Heston, Middlesex, in 1992. British rock band Marillion released an eighteen-minute song called "Ocean Cloud" on its 2004 album Marbles based on Allum's 1987 crossing. 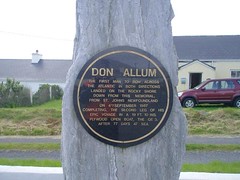 Don Allum the first man to row across the Atlantic in both directions landed on the rocky shore down from this memorial, from St. John's Newfoundland on 4th September 1987 completing the second leg of his epic voyage in a 19 ft. 10 ins. plywood open boat, the QE 3, after 77 days at sea.