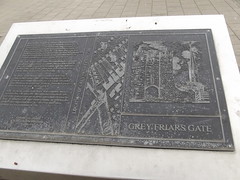 Greyfriars Gate Bull Yard was formerly a short street (Bull Street) leading to Barrack's Square Market (now Barracks car park), but on Samuel Bradford's 1748-9 Coventry map it was part of a much longer path leading from Greyfriars Gate to Smithford Street, beside the Black Bull Inn - "The Back Way to the Bull". The path was used by the Royalist leader, the Earl of Northampton, to escape from the Inn when troops were outnumbered by Parliamentarian forces in 1642 during the Civil War. "The Bull" a three-storey timber framed building of eight bays, mentioned in the 15th century documents was the Black Bull by the 17th century. A large field belonging to the Inn was called the Bull Field, in 1793 the "Black Bull" was replaced by the Cavalry Barracks, a five bay stone building. The plaque at the Shelton Square entrance to Bull Yard commemorates another "bull",. the Dun Cow slain by Guy of Warwick. In Coventry legend the cow was a huge wild boar, which terrorised the people and rooted up Swanswell (Swine's Well) Pool with it's snout - till Guy slew it. In the paving the outline of the Town Wall is marked: this was built between 1385 and 1391. Also depicted is Greyfriars gate, one of the principal gates out of twelve which once circuited the Wall. It's actual site was in the roadway nearby. In 1648 Royalist soldiers were imprisoned there. In 1705 it was made into a dwelling but was demolished in 1781.