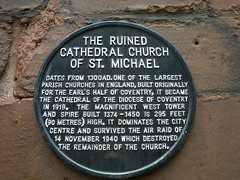 The ruined cathedral Church of St Michael. Dates from 1300AD. One of the largest parish churches in England, built originally for the Earl's half of Coventry, it became the cathedral of the Diocese of Coventry in 1918. The magnificent west tower and spire built in 1374-1450 is 295 feet (90 metres) high. It dominates the city centre and survived the air raid of 14 November 1940 which destroyed the remainder of the church

St Michael's Avenue, Coventry, United Kingdom where it destroyed in The Blitz (1940) and became the cathedral of the Diocese of Coventry (1918)