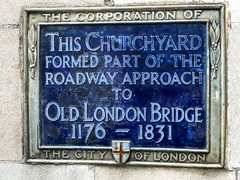 Old London Bridge. First built by the Romans, this was the only bridge over the Thames ...
London, United Kingdom

Old London Bridge. First built by the Romans, this was the only bridge over the Thames in London until 1750. Until 1830, London Bridge stood a short distance downstream from where the existing bridge is now. The north side extended under the tower of St Magnus the Martyr church, whilst the south end was on the site of No 1 London Bridge. Stones from this bridge can still be seen in St Magnus churchyard. An alcove from the bridge, added in the 18th Century, now stands int he grounds of Guy's Hospital. The bridge was rebuilt in 1972, the south end of it's Victorian predesccor still survives in situ. The rest now stands in Lake Havasu, USA.