John Henry Carless (11 November 1896 – 17 November 1917) was a British recipient of the Victoria Cross during the First World War. 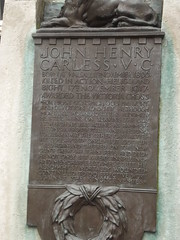 Carless Street formerly Oxford Street was renamed in 1923 to the memory of John Henry Carless, awarded a posthumous VC for gallantry in action at sea on 17th November 1917

Carless Street, Walsall, United Kingdom where they is commemorated

John Henry Carless VC Born at Walsall 11th November 1896, killed in action Heligoland Bight 17th November 1917. Awarded the Victoria Cross "For most conspicuous bravery and devotion to duty. Although mortally wounded in the abdomen, he still went on serving the gun at which he was acting as rammer, lifting a projectile and helping to clear away the other casualties. He collapsed once, but got up, tried again, and cheered on the new gun's crew. He then fell and died. He not only set a very inspiring and memorable example but he also, whilst mortally wounded continued to do effective work against the King's enemies"