Admiral James Vashon (9 August 1742 – 27 October 1827) was a British officer of the Royal Navy. He saw service during the Seven Years' War, the American War of Independence and the French Revolutionary and Napoleonic Wars. He was first captain of HMS Dreadnought, between 1801 and 1802. Previously, he had commanded Alert (1781), Europa (1786), and Formidable. Washington's Vashon Island was named after him by the explorer George Vancouver, who had been Vashon's subordinate in Europa. Vashon rose to the rank of Admiral of the White and was knighted. He is reported to have been stationed for many years in the West Indies. 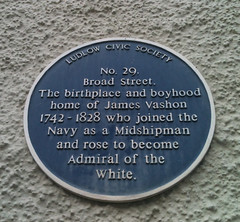 No. 29 Broad Street The birthplace and boyhood home of James Vashon 1742 - 1828 who joined the Navy as a Midshipman and rose to become Admiral of the White.

29 Broad Street, Ludlow, United Kingdom where they was born (1742) and lived