Corporation Street is a main shopping street in Birmingham city centre, England.It runs from the law courts at its northern end to the centre of New Street at its southern. 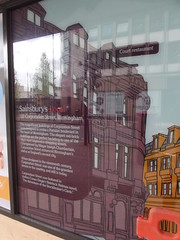