campaigner for the abolition of slavery

Lieutenant John Clarkson, RN (1764–1828) was the younger brother of Thomas Clarkson, one of the central figures in the abolition of slavery in England and the British Empire at the close of the 18th century. As agent for the Sierra Leone Company, Lieutenant Clarkson was instrumental in the founding of Freetown, today Sierra Leone’s capital city, as a haven for chiefly formerly enslaved African-Americans first relocated to Nova Scotia by the British military authorities following the American Revolutionary War. John Clarkson not only founded Freetown, but was also the first governor of the settlement. Because of his work in establishing Freetown, John Clarkson is considered to be one of the founding fathers of Sierra Leone, alongside Granville Sharp, Thomas Peters, and Henry Thornton. To this day, the last prayer by John Clarkson at Freetown can be found in the houses of Creoles and other Sierra Leoneans alike. To the Nova Scotians, 'Governor Clarkson' was both 'Father' and their 'Moses' who delivered them into the promised land. 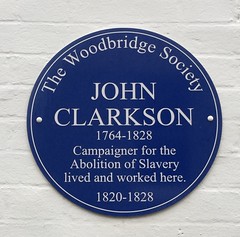