The City of London School, also known as CLS and City, is an independent day school for boys in the City of London, England, on the banks of the River Thames next to the Millennium Bridge. It is the brother school of the City of London School for Girls and a member of the Headmasters' and Headmistresses' Conference (HMC). The School was founded by a private Act of Parliament in 1834, following a bequest of land in 1442 for poor children in the City of London. The original school was established at Milk Street, moving to the Victoria Embankment in 1879 and its present site on Queen Victoria Street in 1986. The school provides day education to about 900 boys aged 10 to 18 and employs approximately 100 teaching staff and around another 100 non-teaching staff. The majority of pupils enter at 11, some at 13 and some at 16 into the Sixth form. There is a small intake at 10 into Old Grammar, a year group consisting of two classes equivalent to primary school Year 6. Admissions are based on an entrance examination and an interview. Among Old Citizens who have attained eminence in various fields are Prime Minister Herbert Asquith, the First World War hero Theodore Bayley Hardy, Nobel Prize–winning scientists Frederick Gowland Hopkins and Peter Higgs, Justice of the Supreme Court Lawrence Collins, England cricket captain Mike Brearley and Booker Prize-winning authors Kingsley Amis and Julian Barnes. 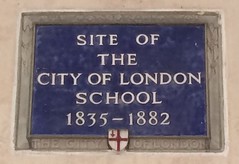