Sun Yat-sen (/ˈsʌn ˌjætˈsɛn/; born Sun Deming; 12 November 1866 – 12 March 1925) was a Chinese statesman, physician, and political philosopher, who served as the first provisional president of the Republic of China and the first leader of the Kuomintang (Nationalist Party of China). He is called the "Father of the Nation" in the Republic of China, and the "Forerunner of the Revolution" in the People's Republic of China for his instrumental role in the overthrow of the Qing dynasty during the Xinhai Revolution. Sun is unique among 20th-century Chinese leaders for being widely revered in both Mainland China and Taiwan. Sun is considered to be one of the greatest leaders of modern China, but his political life was one of constant struggle and frequent exile. After the success of the revolution in 1911, he quickly resigned as president of the newly founded Republic of China and relinquished it to Yuan Shikai. He soon went to exile in Japan for safety but returned to found a revolutionary government in the South as a challenge to the warlords who controlled much of the nation. In 1923, he invited representatives of the Communist International to Canton (Guangzhou) to re-organize his party and formed a brittle alliance with the Chinese Communist Party. He did not live to see his party unify the country under his successor, Chiang Kai-shek, in the Northern Expedition. He died in Peking (Beijing) of gallbladder cancer on 12 March 1925. Sun's chief legacy is his political philosophy known as the Three Principles of the People: Mínzú (民族主義, Mínzúzhǔyì) or nationalism (independence from foreign domination), Mínquán (民權主義, Mínquánzhǔyì) or "rights of the people" (sometimes translated as "democracy"), and Mínshēng (民生主義, Mínshēngzhǔyì) or people's livelihood (sometimes translated as "communitarianism" or "welfare"). 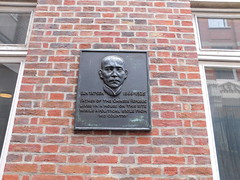 Sun Yat-Sen "Father of Modern China" was a frequent visitor to this house while in exil...
Cottered, United Kingdom