One Foot in the Grave is a British television sitcom written by David Renwick. There were six series (each consisting of six half-hour shows) and seven Christmas specials over a period of ten years from early 1990 to late 2000. The first five series were broadcast between January 1990 and January 1995. For the next five years, the show appeared only as Christmas specials, followed by one final series in 2000. The series features the exploits of Victor Meldrew, played by Richard Wilson, and his long-suffering wife, Margaret, played by Annette Crosbie. Wilson initially turned down the part of Meldrew and David Renwick considered Les Dawson for the role, until Wilson changed his mind. The programmes invariably deal with Meldrew's battle against a long series of problems, some of which he creates for himself. Set in an unnamed town in Southern England, Victor takes involuntary early retirement. His various efforts to keep himself busy while encountering various misfortunes and misunderstandings are the themes of the sitcom. Indoor scenes were filmed at BBC Television Centre with most exterior scenes filmed on Tresillian Way in Walkford in Christchurch, Dorset. Despite its traditional production, the series subverts its domestic sitcom setting with elements of black humour and surrealism. The series was occasionally the subject of controversy for some of its darker story elements, but nevertheless received a number of awards, including the 1992 BAFTA for Best Comedy. The programme came 80th in the British Film Institute's 100 Greatest British Television Programmes. Four episodes were remade for BBC Radio 2. The series inspired a novel, published in 1992, featuring the most memorable moments from the first two series and the first Christmas special. 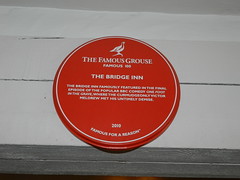 The Bridge Inn famously featured in the final episode of the popular BBC Comedy 'One Foot In The Grave', where the curmudgeonly Victor Meldrew met his untimely demise