Moshe ben Maimon (Hebrew: משה בן מימון‎‎ Moshe ben Maymon), or Mūsā bin Maymūn (Arabic: موسى بن ميمون‎‎), acronymed Rambam (/ˈrɑːmbɑːm/; Hebrew: רמב״ם‎‎ – for "Rabbeinu Moshe Ben Maimon", "Our Rabbi/Teacher Moses Son of Maimon"), and Graecized (and subsequently Latinized) Moses Maimonides (/maɪˈmɒnɪdiːz/ my-MON-i-deez), a preeminent medieval Sephardic Jewish philosopher and astronomer, became one of the most prolific and influential Torah scholars and physicians of the Middle Ages. Born in Cordova, Almoravid Empire (present-day Spain) on Passover Eve, 1135 or 1138, he died in Egypt on December 12, 1204, whence his body was taken to the lower Galilee and buried in Tiberias. He worked as a rabbi, physician, and philosopher in Morocco and Egypt. During his lifetime, most Jews greeted Maimonides' writings on Jewish law and ethics with acclaim and gratitude, even as far away as Iraq and Yemen, and although Maimonides rose to become the revered head of the Jewish community in Egypt, there were also vociferous critics of some of his writings, particularly in Spain. Nonetheless, he was posthumously acknowledged as among the foremost rabbinical arbiters and philosophers in Jewish history, and his copious work comprises a cornerstone of Jewish scholarship. His fourteen-volume Mishneh Torah still carries significant canonical authority as a codification of Talmudic law. He is sometimes known as "ha Nesher ha Gadol" (the great eagle) in recognition of his outstanding status as a bona fide exponent of the Oral Torah. Aside from being revered by Jewish historians, Maimonides also figures very prominently in the history of Islamic and Arab sciences and is mentioned extensively in studies. Influenced by Al-Farabi (ca. 872–950/951), Avicenna (c. 980 – 1037), and his contemporary Averroes (1126–1198), he in his turn influenced other prominent Arab and Muslim philosophers and scientists. He became a prominent philosopher and polymath in both the Jewish and Islamic worlds. 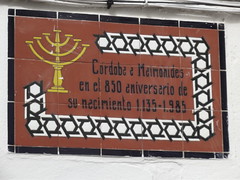