Discovery Site of the Plainview Point. The first of this distinctive type of early man dart point was found by 15-year-old Val Keene Whitacre in 1941, in a caliche quarry on Running Water Draw. In 1944, quarry workers uncovered a fossil bone deposit, which was noted by scientists surveying the geology of the Plains. The next year a team of archeologists from the University of Texas, including Dr. E. H. Sellards and Dr. Alex D. Krieger, excavated the site and found 26 man-made artifacts, including several of the points, in association with the remains of about 100 extinct bison (Bison Taylori), about twice the size of modern species. The long flint point was then named for this site. The bone bed probably resulted from the primitive hunting method of stampeding bison over a cliff, and butchering of the dead and crippled animals for food. The cliff eroded away and covered the bones with 12 to 14 feet of silt. When exposed, the bone bed was 62 feet long, up to 10 feet wide, and 1.5 feet thick. Radiocarbon dating indicates that this site is 8,000 to 9,000 years old. The Plainview point is found most commonly in the Great Plains region of North America, but has been located also in Alaska and Mexico. 1973 #1228 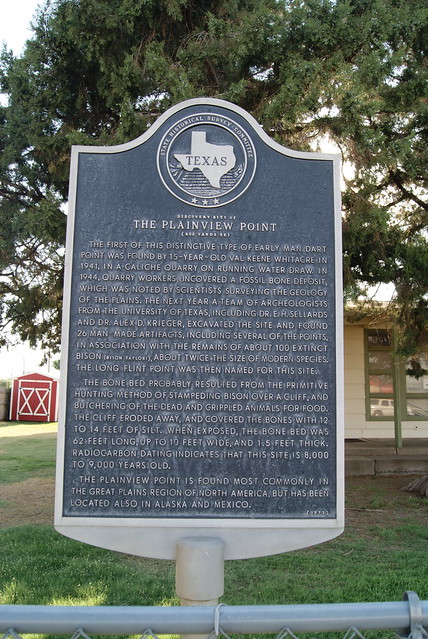