Morris Sheppard Dam and Possum Kingdom Lake. Built in response to disastrous Brazos River flooding, Morris Sheppard Dam and Possum Kingdom Reservoir were early attempts at water conservation and flood control in Texas. The U.S. Government funded $4,500,000 of the three-year, $8,500,000 project through the Works Progress Administration, a Depression era recovery agency. Named for U.S. Senator Morris Sheppard and completed in 1941, the dam is 2,740 feet long and 190 feet high. Nine spillway gates allow for the passage of flood waters and drift material. Power generating facilities consist of two 11,250-killowatt units which serve much of the surrounding area. The creation of Possum Kingdom Lake from the impounded waters of Morris Sheppard Dam sent bridges, roads and an entire town underwater. Recovery was initially slow, but quickly picked up after World War II with the establishment of major fishing lodges, camping areas and other recreational facilities. The growth and success of the area is a tribute to the spirit of the surrounding communities which continue to benefit from the project's original purposes of water conservation and supply, and hydroelectric power generation. (1983) #3475 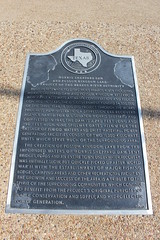