Horrell-Higgins Feud. The Horrell and Higgins families were among the early settlers of Lampasas County. Tom, Mart, Merritt and Sam Horrell were accused of many crimes, including cattle rustling and murder. Pink Higgins was a cattleman and trail driver who, in 1876, began accusing the Horrell brothers of stealing his cattle. On January 22, 1877, Pink Higgins shot and killed Merritt Horrell in the Gem Saloon. This was the beginning of a six-month battle between the Horrell brothers and Pink Higgins, Bob Mitchell, Bill Wren and their followers. On March 26, Tom and Mart Horrell were ambushed on their way into Lampasas. Captain John C. Sparks of the Texas Rangers went in pursuit, but no one was captured. Higgins remained a fugitive, but eventually surrendered and was ordered to appear in court. On June 4, the Lampasas County District Clerk's Office was burglarized and District Court records were destroyed. Three days later, the biggest battle of the feud took place on the public square in Lampasas; one man from each side was killed. Major John B. Jones, commander of the Texas Ranger Frontier Battalion, came to Lampasas and sent Sergeant N. O. Reynolds and a company of Rangers out to capture the Horrells. The brothers were arrested and agreed to make peace by sending a letter of reconciliation to the Higgins party. This treaty was the formal end to one of the worst feuds in Texas history. What was perhaps the true termination of the feud came in 1878 in the town of Meridian, when Tom and Mart Horrell were murdered in their jail cell by a vigilante mob. Sam Horrell left Texas, resettled in Oregon and died of old age. Pink Higgins eventually settled near Spur in West Texas and went to work as a range detective. (2000) #12017 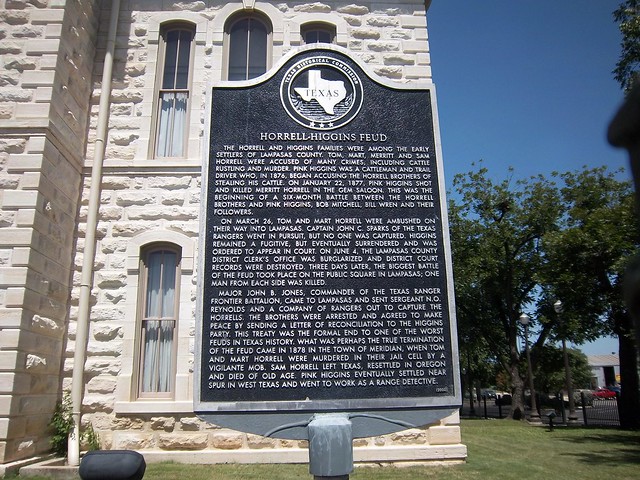