Seaton Brethren Church. In the middle 19th century, Moravian Czech immigrants began arriving in Texas, settling throughout the central part of the state. Descendants of the Czech religious movement known as Jednota Bratrska, or "Unity of the Brethren," based on the teachings of Jan Hus, were among those seeking religious freedom as well as economic opportunity. In 1881, several Czech families settled in this area. Ten years later, the community applied for a post office and became known as Seaton. At that time, Seaton had a general store, and within several years, area residents also supported a school. In 1902, the Rev. Adolph Chlumsky began publishing the monthly Bratrske Listy (now Brethren Journal), which helped unify Brethren immigrants throughout Texas and present-day Oklahoma. In 1906, Seaton residents organized the Seaton Czech Moravian Brethren Church, which received a state charter the following year. The Rev. Anton Motycka led the founding members, who held services in private homes and in schools in Seaton and Cyclone before constructing their first sanctuary, which was dedicated in 1907. Over the next several years, members painted the church building and added a hand-pump organ and a bell. In 1917, women in the congregation organized the Christian Sisters Society. With a growing membership, the congregation built a new sanctuary in 1924, and it was remodeled extensively during the late 1900s. Over time, the church served not only members of Czech descent, but those of other cultures as well. With Christian education, support and service programs, the church today remains a spiritual, cultural and historical center for the area. (2006) #13795 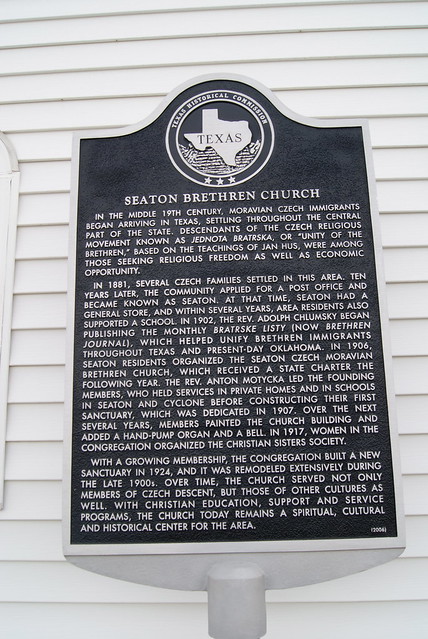