Holland Community Present-day Holland has its origins in three different settlements. Settlers first came here during the 1830s to farm the area’s fertile soil. A community named Mountain Home (0.5 mi SE) formed along Darrs Creek and included a school, church, businesses and a cotton gin. A post office opened in 1870, with James Shaw serving as postmaster. In 1874, James R. “Rube” Holland (1847-1912), a Civil War veteran, came to Bell county from Arkansas. In 1878, he built a steam-powered cotton gin on his property three miles southwest of Mountain Home. The next year, a post office named Holland opened in a store near the gin; Alfred Evans (1810-1896), a former state representative and veteran of the Indian Wars and the U.S.-Mexico War, was appointed postmaster. In 1881, the Missouri-Kansas-Texas Railroad passed through this area. G.M. Dodge (1831-1916), a Civil War veteran and civil engineer, purchased land for this town site, which became known as (New) Mountain Home. Businesses moved from Old Mountain Home to this new town, and in 1882, the Holland Post Office moved here as well. The community adopted the name Holland by the mid-1880s. The new town grew quickly; immigrants, primarily Czechs and Germans, soon came here and helped the farming community become a leading producer of cotton. A rural telephone system was started in 1902 and electricity was connected in 1915. By 1920, Holland had several churches, two banks, two hotels, noted schools, four cotton gins, an opera house and a population of over 1,000 residents. A volunteer fire department officially organized in 1929. Today, Holland persists as an agricultural community rich in heritage and history. (2009) Marker is Property of the State of Texas 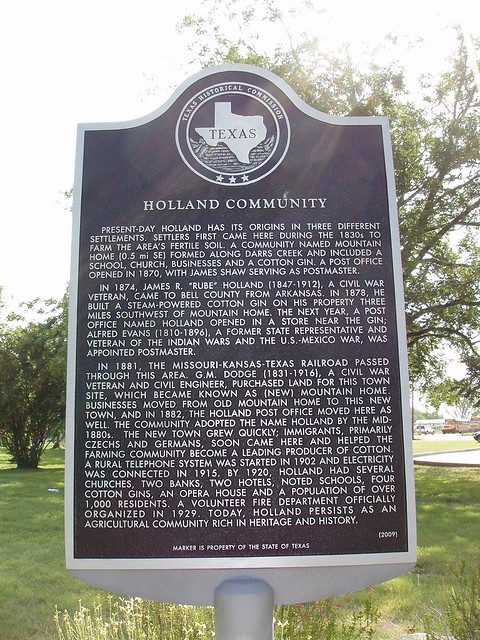 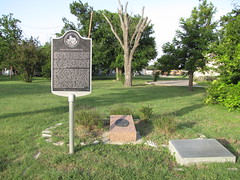 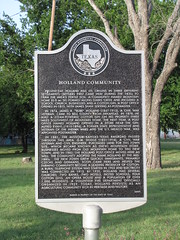