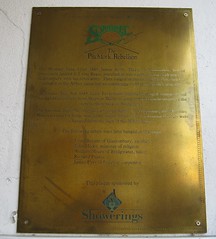 On this site stood the medieval White Horse Inn. The pitchfork rebellion. On Monday June 22nd 1685 James Scott, Duke of Monmouth, having previously landed at Lyme Regis, marched in wet weather from Bridgewater to Glastonbury with his rebel army. They lodged in the two parish churches and camped in the Abbey ruins before continuing to Shepton Mallet next day. On Friday July 3rd 1695 Lord Feversham leading the royal troops passed through Glastonbury from Shepton Mallet to camp at Somerton in pursuit of the rebels, then back in Bridgewater. On Tuesday July 7th, the day after the Battle of Sedgemoor, the Wiltshire Militia leaving for home marched to Glastonbury where 6 unarmed rebels were hanged from the sign of the White Hart. the following rebels were later hanged in the town: Israel Bryant of Glastonbury, yeoman; John Hicks, minister of religion; William Meare of Bridgewater, tailor; Richard Pearce; James Pyes of Colyton, carpenter