Charles X (born Charles Philippe, Count of Artois; 9 October 1757 – 6 November 1836) was King of France from 16 September 1824 until 2 August 1830. An uncle of the uncrowned Louis XVII and younger brother to reigning kings Louis XVI and Louis XVIII, he supported the latter in exile. After the Bourbon Restoration in 1814, Charles (as heir-presumptive) became the leader of the ultra-royalists, a radical monarchist faction within the French court that affirmed rule by divine right and opposed the concessions towards liberals and guarantees of civil liberties granted by the Charter of 1814. Charles gained influence within the French court after the assassination of his son Charles Ferdinand, Duke of Berry, in 1820 and succeeded his brother Louis XVIII in 1824. His reign of almost six years proved to be deeply unpopular amongst the liberals in France from the moment of his coronation in 1825, in which he tried to revive the practice of the royal touch. The governments appointed under his reign reimbursed former landowners for the abolition of feudalism at the expense of bondholders, increased the power of the Catholic Church, and reimposed capital punishment for sacrilege, leading to conflict with the liberal-majority Chamber of Deputies. Charles also approved the French conquest of Algeria as a way to distract his citizens from domestic problems, and forced Haiti to pay a hefty indemnity in return for lifting a blockade and recognizing Haiti's independence. He eventually appointed a conservative government under the premiership of Prince Jules de Polignac, who was defeated in the 1830 French legislative election. He responded with the July Ordinances disbanding the Chamber of Deputies, limiting franchise, and reimposing press censorship. Within a week France faced urban riots which led to the July Revolution of 1830, which resulted in his abdication and the election of Louis Philippe I as King of the French. Exiled once again, Charles died in 1836 in Gorizia, then part of the Austrian Empire. He was the last of the French rulers from the senior branch of the House of Bourbon. 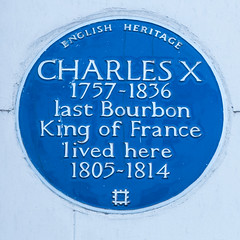