Hannah More (2 February 1745 – 7 September 1833) was an English religious writer and philanthropist, remembered as a poet and playwright in the circle of Johnson, Reynolds and Garrick, as a writer on moral and religious subjects, and as a practical philanthropist. Born in Bristol, she taught at a school founded there by her father and began writing plays. She became involved with the London literary elite and a leading Bluestocking member. Her later plays and poetry became more evangelical; she joined a group campaigning against the slave trade. In the 1790s she wrote several Cheap Repository Tracts on moral, religious, and political topics for distribution to the literate poor (as a riposte to Thomas Paine's Rights of Man). Meanwhile, she broadened her links with schools she and her sister Martha had founded in rural Somerset. These followed her strictures on education of the poor, permitting a limited reading ability but no writing. 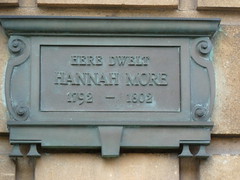 Hannah More 1745-1833 Christian educationalist, writer and anti-slavery campaigner, was born in the master’s house of this charity school, built c.1728.

Manor Road, Bristol, United Kingdom where they was born (1745)