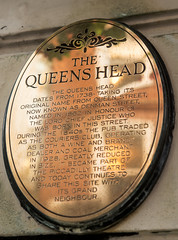 The Queens Head dates from 1738 - taking its original name from Queen Street, now known as Denman Street, named in 1862 in honour of the Lord Chief Justice who was born in this street. During the 1840's the pub traded as the couriers club, operating as both a wine and brandy dealer and coal merchant in 1928, greatly reduced in size, it became part of the Piccadilly Theatre and today continues to share this site with its grand neighbour