woman, housing reformer, and founder of the National Trust

Octavia Hill (3 December 1838 – 13 August 1912) was an English social reformer, whose main concern was the welfare of the inhabitants of cities, especially London, in the second half of the nineteenth century. Born into a family with a strong commitment to alleviating poverty, she herself grew up in straitened circumstances owing to the financial failure of her father's businesses. With no formal schooling, she worked from the age of 14 for the welfare of working people. Hill was a moving force behind the development of social housing, and her early friendship with John Ruskin enabled her to put her theories into practice with the aid of his initial investment. She believed in self-reliance, and made it a key part of her housing system that she and her assistants knew their tenants personally and encouraged them to better themselves. She was opposed to municipal provision of housing, believing it to be bureaucratic and impersonal. Another of Hill's concerns was the availability of open spaces for poor people. She campaigned against development on existing suburban woodlands, and helped to save London's Hampstead Heath and Parliament Hill Fields from being built on. She was one of the three founders of the National Trust, set up to preserve places of historic interest or natural beauty for the enjoyment of the British public. She was a founder member of the Charity Organisation Society (now the charity Family Action) which organised charitable grants and pioneered a home-visiting service that formed the basis for modern social work. She was a member of the Royal Commission on the Poor Laws in 1905. Hill's legacy includes the large holdings of the modern National Trust, several housing projects still run on her lines, a tradition of training for housing managers, and the Octavia Hill Birthplace House established by the Octavia Hill Society at her birthplace in Wisbech. 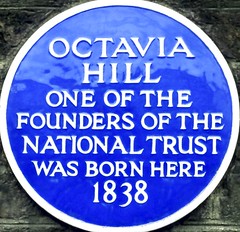 Octavia Hill one of the founders of the National Trust was born here 1838
Wisbech, United Kingdom Octavia Hill, a pioneer in housing reform built these cottages "for the people" in 1895. The were restored in their centenary year by the Octavia Hill Housing Trust.