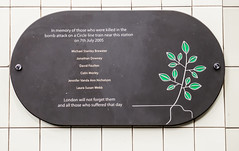 In memory of those who were killed in the bomb attack on a Circle line train near this station on 7th July 2005 Michael Stanley Brewster, Jonathan Downey, David Foulkes, Colin Morley, Jennifer Vanda Ann Nicholson, Laura Susan Webb. London will not forget them and all those who suffered that day