Aneurin Bevan (pronunciation: /əˈnaɪrɪn/; Welsh: [aˈnəɨ.rin]; 15 November 1897 – 6 July 1960), often known as Nye Bevan, was a Welsh Labour Party politician who was the Minister for Health in the post-war Attlee government from 1945 to 1951. The son of a coal miner, Bevan was a lifelong champion of social justice, rights of working people, and democratic socialism. He was a long-time Member of Parliament (MP), representing Ebbw Vale in South Wales for 31 years. He was one of the chief spokesmen for the Labour Party's left wing, and of left-wing British thought generally. His most famous accomplishment came when, as Minister of Health, he spearheaded the establishment of the National Health Service, which was to provide medical care free at point-of-need to all Britons. He resigned when the Attlee government decided to transfer funds from the National Insurance Fund to pay for rearmament. He subsequently became the leader of the left-wing group within the party, which came to be known as "Bevanite". Bevan remains one of Wales's most revered politicians. In 2004, over 40 years after his death, he was voted first in a list of 100 Welsh Heroes, having been credited for his contribution to the welfare state. 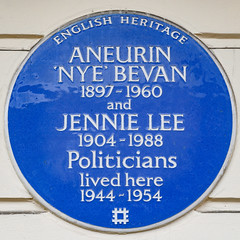 Trafford General Hospital Birthplace of the NHS. Commemorating the visit of Aneurin Bevan, Minister of Health, on 5th July 1948 to launch the the National Health Service