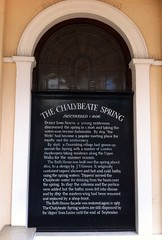 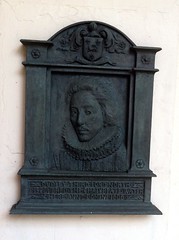 The Chalybeate Spring. Discovered c.1606. Dudley Lord North, a young nobleman, discovered the spring in c1606 and taking the waters soon became fashionable. By 1619 "the Wells" had become a popular meeting place for royalty and the aristocracy. By 1676, a flourishing village had grown up around the Spring, with a number of London shopkeepers taking residence along the Upper Walks for the summer season. The Bath House was built over the spring about 1804, to a design by J.T. Groves. it originally contained vapour shower and hot and cold baths using the spring waters. "Dippers" served the chalybeate water for drinking from the basin over the spring. In 1847 the columns and the portico were added but the baths soon fell into disuse and by 1857 the eastern wing had been removed and replaced by a shop front. The Bath House facade was restored again in 1987. The Chalybeate Spring waters are still dispensed by the 'dipper' from Easter until the end of September.

The Pantiles, Tunbridge Wells, United Kingdom where they was (1606)

The Pantiles, Tunbridge Wells, United Kingdom where they was