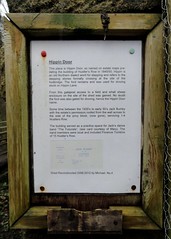 Hippin Door. This place is Hippin Door, so named on estate maps pre-dating the building of Hustler's Row in 1849/50. Hippin is an old Northern dialect word for stepping and refers to the stepping stones formerly at the site of the footbridge. The ford remains and was used for droving stock on Hippin Lane. From this gatepost access to a small field and sheep enclosure on the site of the shed was gained. No doubt the ford was also gated for droving, hence the Hippin Door name. Some time between the 1930s to early 50s Jack Bumby with the estate's permission roofed from the wall across to the side of the privy block (now gone) servicing 1-4 Hustlers Row. The building served as a practice space for Jack's dance band 'The Futurists'. The band members were local and included Florence Tomkins of 15 Hustlers Row. Shed reconstructed 2006-12 by Michael, No. 4.