Foxes are small to medium-sized, omnivorous mammals belonging to several genera of the family Canidae. They have a flattened skull, upright triangular ears, a pointed, slightly upturned snout, and a long bushy tail (or brush). Twelve species belong to the monophyletic "true foxes" group of genus Vulpes. Approximately another 25 current or extinct species are always or sometimes called foxes; these foxes are either part of the paraphyletic group of the South American foxes, or of the outlying group, which consists of the bat-eared fox, gray fox, and island fox. Foxes live on every continent except Antarctica. The most common and widespread species of fox is the red fox (Vulpes vulpes) with about 47 recognized subspecies. The global distribution of foxes, together with their widespread reputation for cunning, has contributed to their prominence in popular culture and folklore in many societies around the world. The hunting of foxes with packs of hounds, long an established pursuit in Europe, especially in the British Isles, was exported by European settlers to various parts of the New World. 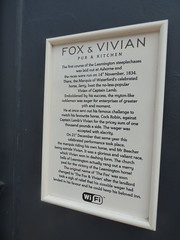 Fox & Vivian Pub & Kitchen The first course of the Leamington Steeplechases was laid out at Ashorne and the races were run on 14th November, 1834. There, the Marquis of Waterford's celebrated horse, Jerry, beat the no-less-popular Vivian of Captain Lamb. Emboldened by his success, the myton-like nobleman was eager for enterprises of greater pith and moment. He at once sent out his famous challenge to match his favourite horse, Cock Robin, against Captain Lamb's Vivian for the pricey sum of one thousand pounds a side. The wager was accepted with alacrity. On 21st December that same year this celebrated performance took place, the marquis riding his own horse, and Mr Beecher being astride Vivian. It was a glorious and valiant race, which Vivian won in dashing form. The church bells of Leamington actually rang out a merry peal for the victory of the Leamington horse! The original name of 'The Fox' was soon changed to 'The Fox & Vivian' after the landlords took a sigh of relief that his sizeable wager had landed in his favour and he could keep his beloved inn.