Charles Stewart Parnell (27 June 1846 – 6 October 1891) was an Irish nationalist politician who served as a Member of Parliament (MP) from 1875 to 1891, also acting as Leader of the Home Rule League from 1880 to 1882 and then Leader of the Irish Parliamentary Party from 1882 to 1891. His party held the balance of power in the House of Commons during the Home Rule debates of 1885–1886. Born into a powerful Anglo-Irish Protestant landowning family in County Wicklow, he was a land reform agitator and founder of the Irish National Land League in 1879. He became leader of the Home Rule League, operating independently of the Liberal Party, winning great influence by his balancing of constitutional, radical, and economic issues, and by his skillful use of parliamentary procedure. He was imprisoned in Kilmainham Gaol, Dublin, in 1882, but he was released when he renounced violent extra-Parliamentary action. The same year, he reformed the Home Rule League as the Irish Parliamentary Party, which he controlled minutely as Britain's first disciplined democratic party. The hung parliament of 1885 saw him hold the balance of power between William Gladstone's Liberal Party and Lord Salisbury's Conservative Party. His power was one factor in Gladstone's adoption of Home Rule as the central tenet of the Liberal Party. Parnell's reputation peaked from 1889 to 1890, after letters published in The Times, linking him to the Phoenix Park killings of 1882, were shown to have been forged by Richard Pigott. The Irish Parliamentary Party split in 1890, following the revelation of Parnell's long adulterous love affair, which led to many British Liberals (a number of them Nonconformists) refusing to work with him, and engendered strong opposition to him from Catholic bishops. He headed a small minority faction until his death in 1891. Parnell is celebrated as the best organiser of an Irish political party up to that time, and one of the most formidable figures in parliamentary history. Despite this noted talent for politics, his career eventually became mired in a personal scandal from which his image never recovered and ultimately he was unable to secure his lifelong goal of obtaining Irish Home Rule. 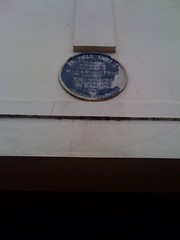 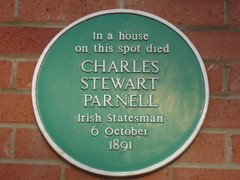 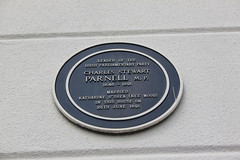 Parnell Court. This building is dedicated to the memory of Charles Stewart Parnell 1846-1891 Member of Parliament and ? ? of No 8 Medina Place

Osborne Villas, Hove, United Kingdom where they lived near

In a house on this spot died Charles Stewart Parnell, Irish statesman, 6 October 1891

Avondale House, Avondale, Ireland where they was born (1846)