Mary Prince (c. 1 October 1788 – after 1833) was a British abolitionist and autobiographer, born in Bermuda to an enslaved family of African descent. Subsequent to her escape, when she was living in London, England, she wrote her slave narrative The History of Mary Prince (1831), which was the first account of the life of a black woman to be published in the United Kingdom. This first-hand description of the brutalities of enslavement, released at a time when slavery was still legal in Bermuda and British Caribbean colonies, had a galvanising effect on the anti-slavery movement. It was reprinted twice in its first year. Prince had her account transcribed while living and working in England at the home of Thomas Pringle, a founder of the Anti-Slavery Society. She had gone to London with her master and his family in 1828 from Antigua. 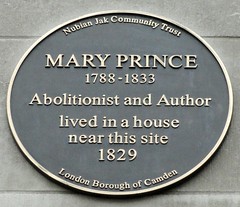