Saint Patrick (Latin: Patricius; Irish: Pádraig [ˈpˠaːd̪ˠɾˠəɟ]; Welsh: Padrig) was a fifth-century Romano-British Christian missionary and bishop in Ireland. Known as the "Apostle of Ireland", he is the primary patron saint of Ireland, the other patron saints being Brigit of Kildare and Columba. Patrick was never formally canonised, having lived prior to the current laws of the Catholic Church in these matters. Nevertheless, he is venerated as a Saint in the Catholic Church and in the Eastern Orthodox Church, where he is regarded as equal-to-the-apostles and Enlightener of Ireland. He is also regarded as a Saint within the framework of their respective doctrine by the Anglican Communion and the Lutheran Churches. The dates of Patrick's life cannot be fixed with certainty, but there is general agreement that he was active as a missionary in Ireland during the fifth century. A recent biography on Patrick shows a late fourth-century date for the saint is not impossible. Early medieval tradition credits him with being the first bishop of Armagh and Primate of Ireland, and regards him as the founder of Christianity in Ireland, converting a society practising a form of Celtic polytheism. He has been generally so regarded ever since, despite evidence of some earlier Christian presence in Ireland. According to the autobiographical Confessio of Patrick, when he was about sixteen, he was captured by Irish pirates from his home in Britain and taken as a slave to Ireland, looking after animals; he lived there for six years before escaping and returning to his family. After becoming a cleric, he returned to northern and western Ireland. In later life, he served as a bishop, but little is known about the places where he worked. By the seventh century, he had already come to be revered as the patron saint of Ireland. Saint Patrick's Day is observed on 17 March, the supposed date of his death. It is celebrated inside and outside Ireland as a religious and cultural holiday. In the dioceses of Ireland, it is both a solemnity and a holy day of obligation; it is also a celebration of Ireland itself. 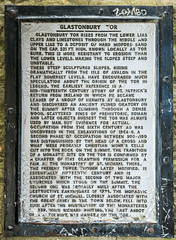 Glastonbury Tor Glastonbury Tor rises from the lower lias clays and limestones through the middle and upper lias to a deposit of hard Midford sand on the cap. 521 ft. high. Known locally as Tor Burr. This is more resistant to erosion than the lower levels. Making the slopes steep and unstable. These steep sculptured slopes, rising dramatically from the Isle of Avalon in the flat Somerset levels, have encouraged much speculation about the origin of the Tor in legend. The earliest reference is a mid-thirteenth century story of St.Patrick's return from Ireland in which he became leader of a group of hermits at Glastonbury and discovered an ancient ruined oratory on the summit after climbing through a dense wood. Scattered finds of prehistoric, roman and later objects suggest the Tor was always used by man, but evidence for actual occupation from the sixth century AD was uncovered in the excavations of 1964-6. A second phase of occupation between 900-1100 was distinguished by the head of a cross and what were probably Christian monk's cells cut into the rock on the summit. The tradition of a monastic site on the Tor is confirmed by a charter of 1243 granting permission for a fair at the monastery of St. Michael there. The present tower though later modified, is essentially fifteenth century and is associated with the second of two major churches which stood on the summit. The second one was probably built after the destructive eartthquake of 1275. The monastic church of St. Michael, closely associated with the great abbey in the town below, fell into ruin after the dissolution of the monasteries in 1539, when Richard Whiting, the last abbot of Glastonbury, was hanged on the Tor.

Glastonbury Tor, Glastonbury, United Kingdom where they was