woman, founder of the Leeds West Indian Carnival, Commissioner for Racial Equality, and head teacher (from 1976)

Gertrude Maretta Paul (6 September 1934 –7 January 1992) was a teacher and advocate for the British Caribbean community in Yorkshire. 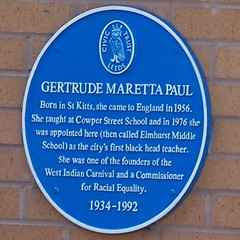 Gertrude Maretta Paul. Born in St. Kitts, she came to England in 1956. She taught at Cowper Street School and in 1976 she was appointed here (then called Elmhurst Middle School) as the city's first black head teacher. She was one of the founders of the West Indian Carnival and a Commissioner for Racial Equality. 1934-1992