Christopher Gist (1706–1759) was an accomplished colonial British explorer, surveyor and frontiersman. He was one of the first white explorers of the Ohio Country (the present-day states of Ohio, eastern Indiana, western Pennsylvania, and northwestern West Virginia, USA). He is credited with providing the first detailed description of the Ohio Country to Great Britain and her colonists. At the outset of the French and Indian War (1754), Gist accompanied Colonel George Washington on missions into this wilderness and saved Washington's life on two separate occasions. 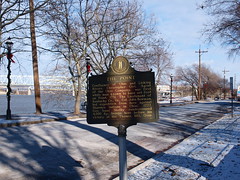 The Point. Confluence of Ohio and Licking Rivers. Christopher Gist, Agent of the Ohio Company, was first white man known to have set foot on Point, 1751. The Lieutenant of Kentucky Co., Va., Col. John Bowman, led expedition from here against Shawnee Indians in Ohio, 1777. Gov. Isaac Shelby rendezvoused 4,000 Ky. troops here before his victory at the Thames, 1813. Over. [full inscription unknown]

, Covington, KY, United States where they was first white person to set foot (1751)