shoemaker and Maker of Footballs to Rugby School

William Gilbert (1799 – 1877) established Gilbert company, the manufacturer of sports equipment, in 1823. Gilbert had a boot and shoemakers shop in the high street next to Rugby School and started making balls for the school out of hand stitched, four-panel, leather casings and pig bladders. It is the shape of the pig’s bladder that is reputed to have given the rugby ball its distinctive oval shape although balls of those days were more plum shaped than oval. The balls varied in size in the beginning depending upon how large the pig’s bladder was and in those early days William's nephew James who was famed for his extraordinary lung power, inflated the balls. It was not a job that was sought after, the pig’s bladder would be blown up while still in its very smelly ‘green state’, solely by lungpower, down the stem of a clay pipe which was inserted into the opening of the bladder. If the pig was diseased, it was possible to develop lung diseases from blowing up the balls. The wife of Richard Lindon, another man who also made balls for Rugby School, died from an infection caught from an infected pigs bladder. This spurred Lindon in the mid-1860s to pioneer the "rubber bladder", the Brass Hand pump inflator and finally the advent of shape standardisation. When William died his nephew James succeeded him. And he has another nephew named Daniel. 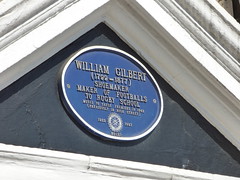