Osred II was King of Northumbria from 789 to 790. He was the son of Alhred and Osgifu, daughter of Eadberht. He succeeded Ælfwald, son of his mother's brother Oswulf, who was murdered by the patricius (ealdorman) Sicga. Osred, even though he united two of the competing factions in Northumbria, was king for only a year before being deposed in favour of the previously deposed Æthelred son of Æthelwald Moll. Osred was then exiled, apparently to the Isle of Man. He returned from exile in 792, and the Anglo-Saxon Chronicle reports that he was "apprehended and slain on the eighteenth day before the calends of October. His body is deposited at Tynemouth." It is presumed that this killing was done by or for King Æthelred, who had had Ælf and Ælfwine, sons of Ælfwald, killed the previous year, and had attempted to kill Eardwulf in 790. 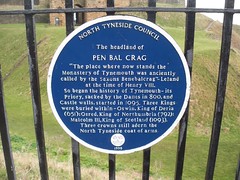 The headland of Pen Bal Crag. "The place where now stands the Monastery of Tynemouth was anciently called by the Saxons Benebalcrag" - Leland at the time of Henry VIII. So began the history of Tynemouth - its Priory, sacked by the Danes in 800, and Castle walls, started in 1095. Three Kings were buried within - Oswin, King of Deria (651); Osred, King of Northumbria (792); Malcolm III, King of Scotland (1093). Three crowns still adorn the North Tyneside coat of arms.

Front Street, Tynemouth, United Kingdom where they was buried near