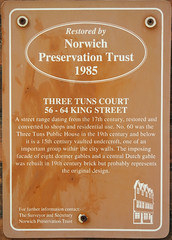 Three Tuns Court 56-64 King Street A street range dating from the 17th century, restored and converted to shops and residential use. No 60 was the Three Tuns Public House in the 19th century and below it is a 15th century vaulted undercroft, one of an important group within the city walls. The imposing facade of eight dormer gables and a central Dutch gable was rebuilt in 19th century brick but probably represents the original design.