Field Marshal Henry William Paget, 1st Marquess of Anglesey, KG, GCB, GCH, PC (17 May 1768 – 29 April 1854), styled Lord Paget between 1784 and 1812 and known as the Earl of Uxbridge between 1812 and 1815, was a British Army officer and politician. After serving as a Member of Parliament for Carnarvon and then for Milborne Port, he took part in the Flanders Campaign and then commanded the cavalry for Sir John Moore's army in Spain during the Peninsular War; his cavalry showed distinct superiority over their French counterparts at the Battle of Sahagún, where his men captured two French lieutenant colonels and so mauled the French chasseurs that they ceased to exist as a viable regiment. He also commanded the cavalry at the Battle of Benavente, where he defeated the elite chasseurs of the French Imperial Guard. During the Hundred Days he led the charge of the heavy cavalry against Comte d'Erlon's column at the Battle of Waterloo. At the end of the battle he lost part of one of his legs to a cannonball, leading to a famous brief exchange of words with Wellington. In later life he served twice as Master-General of the Ordnance and twice as Lord Lieutenant of Ireland. 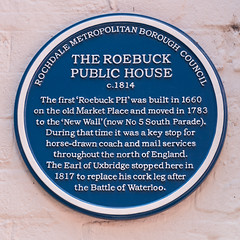 The Roebuck Public House c. 1814 the first 'Roebuck PH' was built in 1660 on the old Market Place and moved in 1783 to the 'New Wall' (now No 5 South Parade). During that time it was a key stop for horse-drawn coach and mail services throughout the north of England. The Earl of Uxbridge stopped here in 1817 to replace his cork leg after the Battle of Waterloo

Yorkshire Street, Rochdale, United Kingdom where they was (1817)