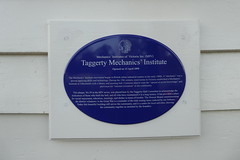 Taggerty Mechanics' Institute. Opened on 15 April 1898. The Mechanics' Institute movement began in British urban industrial centres in the early 1800s. A "mechanic" was a person applying skills and technology. During the 19th century, most towns in Victoria established a Mechanics' Institute or Athenaeum with a library and meeting hall. Common objects were the "spread of useful knowledge" and provision for "rational recreation" in the community. This plaque, No. 59 in the MIV series, was placed here by the Taggerty Hall Committee to acknowledge the dedication of those who built the hall, and all who have maintained it in a long history. It has provided a place for social enjoyment, education, meetings, and shelter in times of trouble. The Honour Board commemorating the district volunteers in the Great War is a reminder of the truly testing times endured by our forbears. Today this beautiful building still serves the community, and is a centre for local activities, drawing the community together as intended by the founders.

5 Taggerty-Thornton Rd, Taggerty, Australia where it was