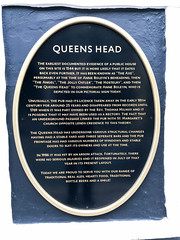 Queens Head The earliest documented evidence of a public house on this site is 1544 but it is more likely that it dates back even further. It has been known as "The Axe". Presumably at the time of Anne Boleyn's beheading, then "The Angel", "The Jolly Ostler", "The Hostelry", and then "The Queens Head" to commemorate Anne Bolyen, who is depicted in our pictorial sign today. Unusually, the pub had its licence taken away in the early 18th century for around 25 years and disappeared from records until 1769 when it was part owned by the Rev. Thomas Milway and it is possible that it may have been used as a rectory. The fact that an underground passage linked the pub with St. Margaret's church oppoiste lends credence to this theory. The Queens Head has undergone various structural changes having had a stable yard and three seperate bars and the pub frontage has had various numbers of windows and stable doors to suit its owners and use at the time. In 1986 it was hit by an arson attack. Foretunately, there were no serious injuries and it reopened in July of that year in its present layout. Today we are pround to serve you with our range of traditional real ales, hearty food, traditional bottled beers and a smile !

Windsor Street, Uxbridge, United Kingdom where it was