Postcard Records is a British, Glasgow-based, independent record label founded by Alan Horne in 1979, as a vehicle for releases by Orange Juice and Josef K. The label's motto was "The Sound of Young Scotland", a parody/tribute to the Motown motto; its logo featured a cartoon cat beating a drum. Although short-lived, Postcard was a key influence on the C81 and the later C86 indie-pop movements, although possibly more associated with sophisti-pop at the time. The label's first release, in spring 1980, was Orange Juice's, "Falling and Laughing", which was jointly financed by Horne and band members Edwyn Collins and bass guitarist David McClymont. The label went on to sign such bands as Aztec Camera and The Go-Betweens, before winding down in 1981 shortly after Orange Juice left to sign a major deal with Polydor. Horne resuscitated Postcard in 1992, releasing various new albums and retrospectives until 1995. The label was profiled in depth in 2015 documentary film, Big Gold Dream, and the 2014 book by Simon Goddard, Simply Thrilled: The Preposterous Story of Postcard Records. In March 2020, Postcard Records appeared to be showing signs of activity again, via a Twitter account @Dubh18.5. Tweets referencing "some kind of reboot", and various archival footage in a series of GIFs hinting at further releases. In December 2020, it was announced that the label was being reactivated to release a deluxe anthology vinyl boxset of recordings by Paul Quinn & The Independent Group, including a 144 page hard backed book. The release is scheduled for the summer of 2021. 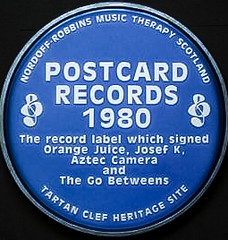 185 West Princes Street, Glasgow, United Kingdom where it was