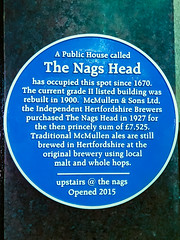 A Public House called The Nags Head has occupied this spot since 1670. The current grade II listed building was rebult in 1900. McMullen & Sons Ltd, the Independent Hertfordshire Brewers purchased The Nags Head in 1927 for the then princely sum of £7,525. Traditional McMullen ales are still brewed in Herfordshire at the original brewery using local malt and whole hops.

10 James St, London, United Kingdom where it was