Thomas David Anderson (6 February 1853 – 31 March 1932) was a Scottish amateur astronomer. He was born in Edinburgh. When he was five years old, his father showed him Comet Donati, and his nanny also gave him an interest in astronomy. He was educated at Edinburgh Institution and Edinburgh University where he studied theology and obtained a D.Sc. in philology in 1880, but abandoned the idea of becoming a minister. He was sufficiently well off financially to pursue astronomy full-time. He became a keen observer, and discovered two fairly well known novas: Nova Aurigae 1892 and Nova Persei 1901. The former marked the first time a nova's spectrum had been photographed, while the latter eventually reached magnitude 0.2 to become the brightest nova in history since the supernova SN 1604, though it was later topped by Nova Aquilae 1918. His timely discoveries enabled spectra to be taken before maximum magnitude was reached. He constructed his own star charts and discovered 53 variable stars, the first being V Cassiopeiae in 1893. He also discovered through research that the 3rd-magnitude star Theta Eridani had been described as 1st-magnitude by Ptolemy and al-Sufi. In 1901, Anderson, Joseph Joachim Landerer, and Henri Chrétien jointly received the Prix Jules Janssen, the highest award of the Société astronomique de France, the French astronomical society. For his nova discoveries he won the Jackson-Gwilt Medal of the Royal Astronomical Society in 1902. He left Edinburgh for good in 1904 in search of better observing conditions. He claimed to have discovered another nova in Cygnus in 1923, but this could not be independently confirmed, and it is possible that it was a flare star. 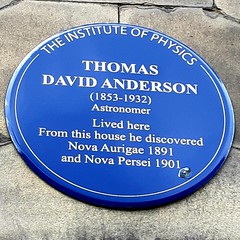