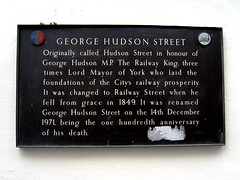 George Hudson Street. Originally called Hudson street in honour of George Hudson M.P. The Railway King, three times Lord Mayor of York who laid the foundations of the City's railway prosperity. It was changed to Railway Street when he fell from grace in 1849. It was renamed George Hudson Street on the 14th December 1971, being the one hundredth anniversary of his death.