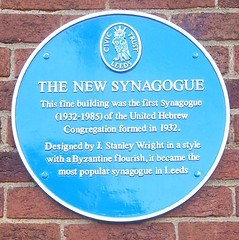 THE NEW SYNAGOGUE. This fine building was the first synagogue (1932-1985) of the United Hebrew Congregation formed in 1932. Designed by J. Stanley Wright in a style with a Byzantine flourish, it became the most popular synagogue in Leeds.