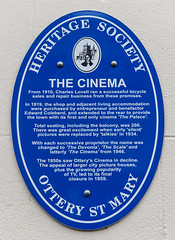 The Cinema From 1910, Charles Lovell ran a successful bicycle sales and repair business from these premises. In 1919, the shop and adjacent living accommodation were purchased by entrepreneur and benefactor Edward Colebred, and extended to the rear to provide the town with its first and only cinema 'The Palace'. Total seating, including the balcony, was 200. There was great excitement early 'silent' pictures were replaced by 'talkies' in 1934. With each successive proprietor the name was changed to 'The Devonian', 'The Scala' and latterly 'The Cinema' from 1946. The 1950's saw Ottery's Cinema in decline. The appeal of larger city picture houses, plus the growing popularity of TV, led to its final closure in 1959.